Under Pressure by Rhonda Lee Carver 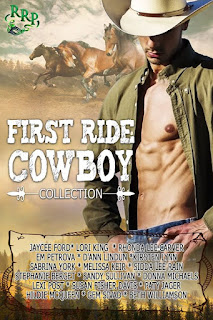 Saddle up for a sexy ride with 18 bestselling and award winning authors as they share with you their first in a series. These cowboys will claim your heart with their rough edges and raw emotions. Dust off your boots, and join us for a ride you’ll never forget.
Coming February 3rd!
https://romancerebelspublishing.com/2017/01/10/first-ride-cowboy/
FEATURING:
Under Pressure by Rhonda Lee Carver
The Stone sisters know their way with a gun, rope, three-inch heels, and a cowboy’s heart.
Forget Me Knot by Lori King
Will her vacation into the heart of cattle country turn out to be a mistake?
Cowboy Crazy by Em Petrova
Five brides for five brothers…at least that’s the deal the Daltons have struck with their boys. Each son must marry in order to inherit a piece of the ranch they love so much.
Watching Fireflies by Jaycee Ford
A cowboy who knew nothing of love. A city girl who wishes she didn’t.
Sweet As Candy by Sidda Lee Rain
She may be the softness to smooth his rough edges. That is…if he can convince her to give an ol’ rodeo bum a chance.
Lazarus by Beth Williamson
Being a Graham isn’t easy, and it’s about to get a lot harder for one stubborn lawman and the woman who still owns his heart.
The Heartsong Cowboy by Melissa Keir
Can two people, one horse and the power of love cure a little girl?
Gimme Some Sugar by Stephanie Berget
She’s is a genius with cupcakes and croissants. He needs a ranch cook to whip up beef, beans and bacon. Love never tasted so good.
Her Fated Cowboy by Donna Michaels
Thrown back into the path of her first love, she finds hers is not the only heart fate has damaged.
Cowboy Proud by D’Ann Lindun
She left town to chase her dreams…he stayed and ignored his…can they find love again?
Davis: Letters of Fate by Paty Jager
A marriage of convenience ignites into a steamy romance and brings two strong wills together.
Make Mine a Cowboy by Sandy Lea Sullivan
She writes fantasy cowboys for a living…but she never expected to find her own on the back roads of Hill Country, Texas.
Chocolate Cowboy by Kirsten Lynn
Returning to Wyoming two things surprised GySgt Jared Worrell…becoming the town chocolatier and Lucy Thomas. Coming home never tasted so sweet.
Montana Bachelor by Hildie McQueen
Rich Bachelor seeks Single Female who won’t mind complications of elite society, a suspicious father and an evil ex-girlfriend…
Cowboys Never Fold by Lexi Post
A cowboy honors a promise by working at a nudist resort but to win the sexy owner’s heart, he must bare more than his soul.
River’s Edge by Gem Sivad
From gunslinger to ranch owner. He’s finding respectability a lot more dangerous than his former life of sin.
Jake: Men of Clifton by Susan Fisher Davis
He can tame the wildest stallion, but can he tame a stubborn redhead that wants nothing to do with him?
The Real McCoy by Sabrina York
She mistakes him for a stripper…he is happy to comply!
Get a taste of:
Under Pressure by Rhonda Lee Carver
Rhinestone Cowgirls, Book #1 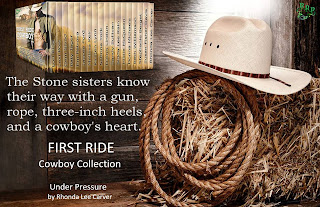 The oldest of three sisters, Jewels Stone takes care of everyone, especially those she loves. When she finds out the youngest Stone is duped, she plans to rope and wrangle the cowboy to teach him a lesson on how to treat a woman.
Tied to a bedpost and as mad as a hornet, Spark Ryder wants to toss Jewels over his knee and spank her. Problem is, he’d enjoy it too much. Held hostage by rope and wax strips, he tries to convince her that she has the wrong cowboy. But how can he convince her that he’s innocent when she’s out to settle a score against all men?
While seeking revenge, Jewels finds a passion that’ll have her hanging by a dream. The pressure is too much and loose threads holding the past begin to unravel. Her brain urges her to run while her heart wishes to stay.
Spark wants nothing but distance with Jewels, but when things start to heat up on the Rhinestone Ranch, he samples Jewels’ treasure and finds himself on the wrong end of the rope again—but it’s his soul that’s bound to a woman who will never trust.
He wants to stitch her broken heart, but will he walk before his own heart is in need of mending?
www.rhondaleecarver.com

SPARK’S NOSE ITCHED. But he couldn’t move his hands to scratch.
Forcing one eye to a slit, he wasn’t in his room, but still in the motel. Damn. He’d fallen asleep.
Opening both eyes, he blinked the fuzziness away and lifted his head. His arms were stretched high above his head and his wrists ached. He darted a glimpse above him.
He was tied to the headboard. Acid gurgled in his stomach. “What the hell!” He gave his hands a jerk, but the rope held them tight. “Fuck!”
Jerking a glance around the room…there she was…sitting in the chair, her legs crossed and a look of satisfaction covering her pretty features.
“What the fuck is this?” Now he understood why Ms. Stone had been throwing herself at him. “Talk to me!” he demanded.
A sticky, tingly sensation brought his gaze lower and on his legs. He squinted. Both legs were covered with some sort of pink, glossy paper.  “And what in God’s creation are those?”
She got up, stood at the end of the bed, a smirk curving her lips. “Wax strips.”
“Get them off me and let me the hell out of this bed!” he snarled
“Are you sure you want me to help you with the strips?” One thin brow curved maliciously.
“Hell yeah!”
She reached down, grabbed the corner of one strip and pulled.
“Ow!” he squealed as a fire like none other raced through his leg. Clenching his teeth, he looked at her through narrowed gaze. “What the hell was that for?’
“You did ask me to help you. So I did.”
“I’m talking about all of this—the rope, the shit on my legs.” He forced a breath through tight lips.
Smugly, she crossed her arms. “This is a lesson earned.”
He popped up a brow. “A lesson? For what?” Bringing his gaze back to his rope twined wrists, he visually examined the headboard. The cord was wrapped around his wrists, fashioned through the five-inch gap into the wooden detail, then pulled back through and tied in a knot. From what he could see, and with another tug, it wasn’t a bad knot.
“I’m sorry, but I have plans so I must hurry. I won’t spend much time with my explanation. You played my sister. Therefore, I’m showing you what it’s like to be played.”
He perused his brain, trying to find a clue as to what she was referring too. He came up blank. This had to be a joke! “Lady, the only one of us who is a player and a manipulator is you.” Seeing a flicker of confusion, he chuckled. “Yes, that’s right, Jewels Stone.”
One brow snapped up and her hands clenched into fists. “So…so, you knew who I was all along?” Her lips thinned. Good thing she didn’t have a weapon, otherwise he’d be dead, he was certain.
“What? You don’t like being caught at your sordid game? Pot. Kettle. Black.” He gave his arms a jerk and the bed creaked.
She darted her glance to his bound wrists, but only a mere flash. “Don’t talk or I’ll have to get the tape and cover your mouth.”
Anger sliced through his gut. Damn, woman! He didn’t doubt for a minute that she’d do as she threatened.
With a cold glance in his direction, she bent and grabbed something. His jeans! She dipped her hand into the back pocket and withdrew his cell. Now what was she doing?
“Be thankful that I’m not cruel, otherwise I’d leave you tied up here until the cleaning lady came, and considering I rented this room for two days, that’d be a long time to stay bound to the bed. Imagine the laugh the employees here would have.”
“Letting me go would be the best decision you’ve made, before things got out of hand.”
“Are you threatening me?” She shook her head. “Tsk, Tsk.”
“You have a warped mind, don’t you?” Pulling himself up, he heard the wood crack and the springs pop. It wouldn’t take much pressure for him to break the bed, but he’d have no way of getting the rope undone. Apparently, she was thinking the same thing because her eyes widened.
“Let’s get this over with, shall we?” She came to stand beside the bed. “Who would you like to call to ask for help?”
“9-1-1,” he grumbled.
“And imagine the story you’d tell. You were sleeping so hard that a woman tied you to the bed and placed hot wax strips on your legs. That’d be another group finding the humor in this scenario. So, would you like to change your contact person?”

Rhonda Lee Carver is the bestselling author of the Second Chance Cowboy Series and Cowboys of Nirvana Series. She’s emotional, fun-loving, known to be witty (sometimes at the wrong times) and values a good love story.
By day, she taps into her creative, fictional world and writes beautifully-flawed, broken characters with big hearts that readers can relate to. In the evening, she travels back to reality and becomes the adoring, saucy wife, chauffeur for her two amazing kids, homework virtuoso (at least she thinks so), amateur nurse, mediocre chef, pet-guru, and a Jackie of all trades. She adds a sprinkle of her own real-life adventures in each story she spins. She wouldn’t give up one thing in her crazy, chaotic, ever-amusing life.
Writing for Rhonda is like falling in love and finding a new best friend over and over again. Her characters will find a place inside of your heart too.

Posted by Rhonda Lee Carver at 12:00 AM No comments:
Email ThisBlogThis!Share to TwitterShare to FacebookShare to Pinterest
Newer Posts Older Posts Home
Subscribe to: Posts (Atom)