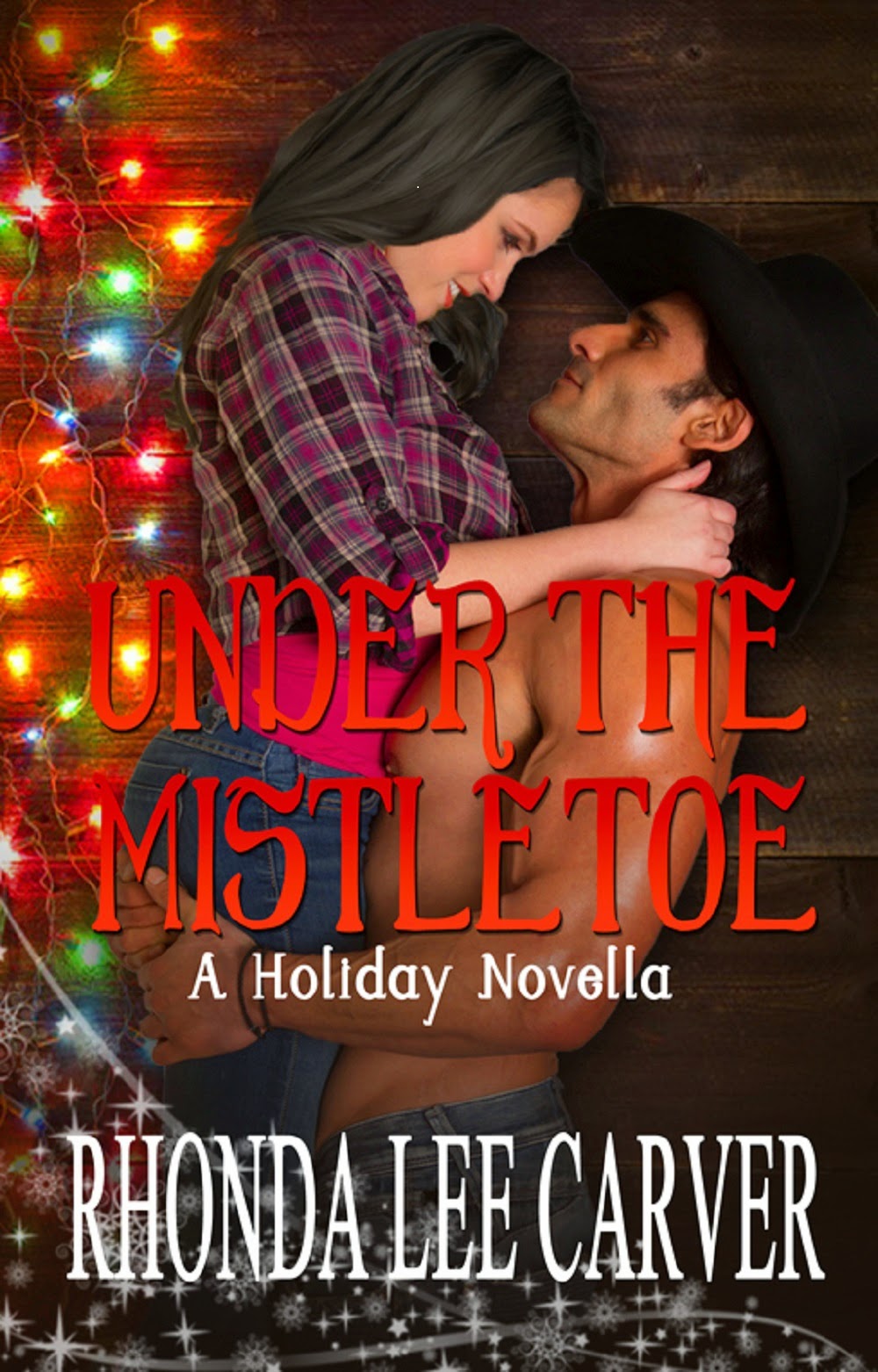 Have you read my newest release, Under The Mistletoe?


Jax wanted Alex…bad.
She smiled and his heart did a triple beat that took his breath.
He liked Alex and he was wishing they’d met before he won the cash prize.
“What would you like for Christmas?” she asked.
“I wish I could have all of the winnings from the slot machine without the IRS taking its share.”
She blew out a long breath. “Now there’s a wasted wish.”
He nodded. The waitress stopped, took their dishes and he ordered another beer. He was glad Alex wasn’t in a hurry to get back to her room. He’d much rather be here with her, enjoying her company and beautiful smile than being in the room with Dayton listening to him snore.
“How are you spending the holiday?” Jax watched her, the way the sparkle in her eyes dulled.
“Home, with family.”
His gaze dropped to her hand. “You’re not wearing a wedding ring, so family as in parents? Brothers, sisters?”
“My parents, sister and her boyfriend—probably turned fiance by now.” She sighed
“And you’re not happy?” He relaxed back into the cushion, staring at her pink, kissable mouth. A penetrating ache flew through him. He shifted his legs to adjust his fly, but his cock was only getting harder.
She pulled a lock of hair behind her ear. “I wouldn’t resent anyone’s happiness, but my sister is the golden child. My parents have been after me for years to settle down and I’ve been a disappointment.”
“You still have a lot of years. What are you…twenty-five? Twenty-six?” He winked.
She laughed. “I’m thirty-two. To my folks that’s a dried up spinster.”
“I’d bet my left arm that nothing about you is dried up.” He smoothed his palm over his chin.
“My parents are like time clocks, reminding me that time passes at the blink of an eye.”
“I think it all depends. If you feel like you’re missing something, then you should change things, but no one, not even a parent, can tell you how to live.” He gripped his bottle. Once upon a time his parents had dreams for him too and they were disappointed when he decided to ride bulls instead of working the ranch.
“It’s this time of year. I have a feeling all of our food and drinks are spiked with a lonely pill.”
“I just rode my last rodeo a few months ago. Then we lost our father. I guess a long phase of sadness is normal, but it sure is hell.” Damn, why did he have to share that? Usually he was a bit tight-lipped when it came to discussing his personal life with a stranger, but she felt more like a friend—maybe even more if things continued.  “It had been difficult to hang up my saddle. Newer, younger riders are coming into the circuit, and my body wasn’t bouncing back as fast as it once did.” More than ever he needed to keep the ranch. He had known all along that one day he’d come back and run it, possibly find a woman to marry, have a couple of kids.
It all seemed like a faraway dream at this point. And it certainly wasn’t the time to think about his future.
Sympathy filled her eyes. He didn’t want her pity.
“I’m sure you know it’s time. A new beginning—an adventure. Give up the bulls for a horse on your ranch.”
He grinned. He liked the way she thought.
Before he wrapped his brain around his next move, he slid around the u-shaped seat until their thighs met. Taking her slender, soft hand, he brought it to his mouth, kissing her knuckles. But it wasn’t enough to tame his curiosity. He slid his free hand to her neck, skimmed the tips of his fingers over the short hairs on her nape and she leaned into him. Her eyes widened slightly, sparkling in the dim overhead lighting. There was no resistance as he drew her even closer and lowered his mouth to hers.
Waves of desire rocketed through him when their lips touched. Her hands were pressing his biceps, then her arms came around his neck, pressing her breasts against his chest. An invitation to continue.
At first, he kissed her softly, taking his time. He slid the tip of his tongue between her lips, parting her mouth, sliding further in to taste her—exploring her.
She groaned deep, eliciting something virile in him.
Everything went blank inside of his head except for the woman he held in his arms. Her vanilla scent, her taste, the way her fingers moved through his hair, it all triggered his raging need.
He moved his fingers from her neck and threaded them into her hair—the tresses reminded him of luxurious satin. He nibbled her bottom lip and she moaned again with more want than before.
His cock was suffocating behind his zipper, throbbing and hard. He couldn’t take much more…
He pulled away, catching his breath. “I might be a little brash, but how about I get us a room for the night. We can continue talking, drinking, order dessert…anything you like.”
Would she slap him for his brazenness then get up and walk out of his life? All he knew was that he didn’t want to let her go.
Or would she, just by chance, say…
“Yes. I’d like that.”

a Rafflecopter giveaway
Posted by Rhonda Lee Carver at 3:00 AM No comments:
Email ThisBlogThis!Share to TwitterShare to FacebookShare to Pinterest

As I begin writing a new series, I put a lot of thought in the names of my characters. After all, the names I pick will stick with these characters for--well--ever! It's like naming a child. We peruse book after book, list after list, finding that perfect name. I'm sure everyone has their own way of finding the suitable name. Maybe it just comes to you in a dream, over dinner, in the bathroom...I had to throw that one in just to see if you were listening ;) There are a few cowboy names that have made their rounds among western writers as of lately--in my books included...

These boys are pretty popular.

are moving on up on this list of popularity. Bo was used a lot at one time, but he's coming back.

How about for a cowgirl?

Those are nice names, but they don't fit my next heroine. The name debate is still on for my newest characters.

Do you have fave names?

READ an EXCERPT of PRESSURE RISING. PRE-ORDER now at AMAZON!

“Let me get this straight.” She wrapped her arms over her waist and eyed Scrawny with a narrowed gaze. “You’re telling me you caught Pugly with Charmin?” She slammed the gate shut to the corral.
Scrawny bobbed his head and scratched his scraggly beard with his dirty encrusted fingernails. After years of knowing her, Pearl believed he shouldn’t act so nervous around her.

“Yes, ma’am. They were doing the dirty, yes-siree, they were.”

“I’m going to kill him!” Icy fingers marched down her spine. She’d had enough! 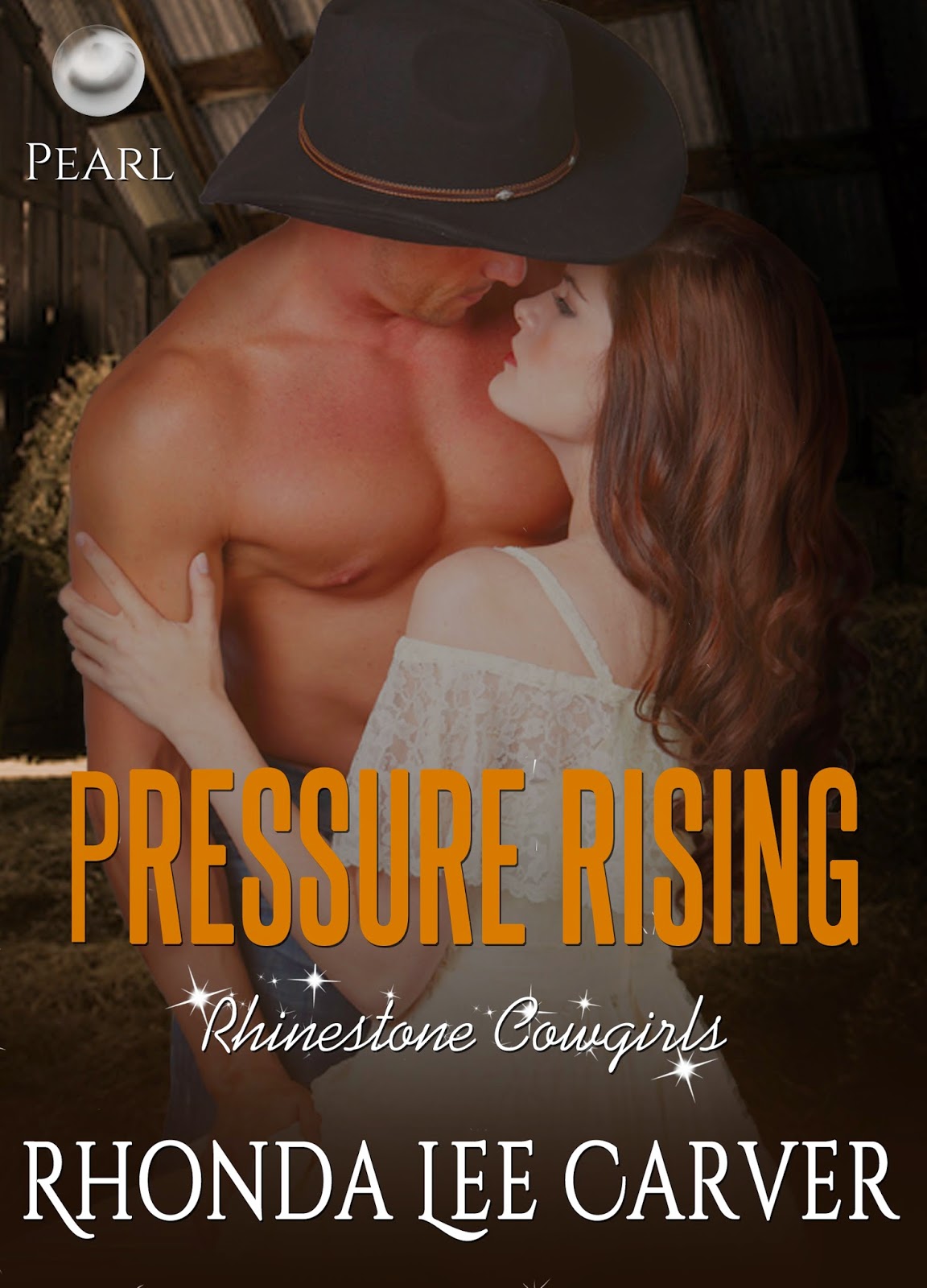 “No, that son-of-a-gun DJ Walters. How many times have I told him to keep that donkey off this property? I swear he does this on purpose.” She kicked up dirt with the toe of her boot. “I knew I’d only have trouble with that scoundrel. I’ve dealt with him for years now and my patience has come to the very last thread! Just last week I was checking the mail and he drove his truck through a mud puddle, splashing me. Can you believe him? I bet if he was looking down the barrel of a shotgun he wouldn’t be so egotistical.”

Scrawny laughed but Pearl kept a straight face. This wasn’t a bit funny! His eyes widened and his jaw clicked. “You aren’t serious, are you, ma’am?”

“Very!” she snapped. “I should have done something about that man long before now.”

“Come on, Pearl. Don’t go high-tailin’ it over at Walter’s R&R and get yourself into trouble, ya hear?” His thin bottom lip trembled. As a ranch hand at the Rhinestone Ranch, Scrawny was always attempting to keep the peace with Pearl and her sisters. Pearl almost felt sorry for the older man because she knew they never made it easy for him.

But she couldn’t go on as things were.

She had every right to feel wrath toward DJ Walters and was tired of his shenanigans!

Tightening her hands into fists, her nails dug into her palms. “Will you finish feeding Charmin for me, Scrawny? There’s something I have to do.”

“Rethink this, Pearl. Nothin’ is ever solved in anger.”

She ignored him, turned and stomped toward the truck, slipped behind the wheel and slammed the door so hard that the metal rattled. Turning the key, the engine roared alive and she cranked the window down. Sweat beaded on her upper lip and she swiped it away on the back of her hand. “Don’t worry, I’ve got this,” she yelled across the yard to Scrawny who was shaking his head.

a Rafflecopter giveaway
Posted by Rhonda Lee Carver at 3:00 AM No comments:
Email ThisBlogThis!Share to TwitterShare to FacebookShare to Pinterest
Newer Posts Older Posts Home
Subscribe to: Posts (Atom)