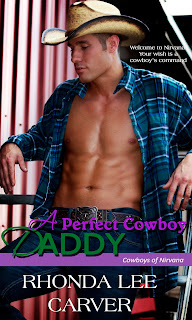 Welcome to Nirvana. Your wish is a cowboy’s command.Not getting any younger and wanting to leave her cheating ex-husband in the past, Moon Novak decides she wants a child, even if she must do it alone. Well…as alone as Mother Nature will allow her. She’s lacking a key factor—a man.Dr. Cam Parker isn’t quite ready to jump into the saddle after losing his wife to cancer, but he isn’t against getting his feet wet with the stunning, brazen cowgirl ranch hand at Nirvana. What he didn’t expect is to become a perfect cowboy daddy. Or that he would fall for the raven-haired beauty. Nirvana Ranch is steamier than ever. There’s lust between the sheets. Secrets. Conflict. Hot cowboys. And a maniac on the loose who wields a deadly club and has a taste for revenge.
Excerpt:
The song ended. Moon wasn’t sure how many she’d danced to, but her damp blouse was an indication she’d burnt off a few hundred calories. If a woman couldn’t burn the calories in bed, no one could stop her from enjoying herself to good music and a couple of beers. Tonight was a celebration. She’d received a call from the clinic setting the date for her insemination appointment. The ball was rolling now.
Stepping off the dance floor, she scooted up to the bar. “Hey, Mickey, can I get another?”
“You think that’s a good idea?” the thick husky voice invaded her semi-buzzed cells.
Swiveling on her heel, she was ready to take on anyone who dared derail her evening. “What’s it any of your—” The words dried up on her tongue as she met the azure gaze of the handsome cowboy who was wearing a grin that could easily knock a woman’s panties off. His hat was hanging on his bent knee and the other leg was stretched out, showing off scuffed boot. “Cam? I half expected you to be hiding in a shadowed corner.” She wrinkled her nose.
He laughed, not offended by her poke in the least. “I’ll give you that one, but I was hoping by now you’d see the humor of the situation.”
She cocked a brow. “Has hell frozen over?”
“Not that I’m a frequent visitor, but I’m going to say no.”
She grabbed up the beer and drank thirstily, wishing the cold liquid would settle her sudden quaking nerves. He shrugged and she tried not to fixate on the way the black T-shirt stretched across his broad shoulders. She also tried not to devote any attention to the long, coiled muscles of his neck, or his bulky biceps that would feel really nice wrapped around her waist. She gave herself an internal shake. Don’t admire the enemy, girl.
“Sorry. Wish I could take it back.” He sighed and rubbed his jaw. He had a nice chin, smooth-shaven and his lips were plump, kissable.
But not for me, of course.
“You don’t seem sorry at all.”
There was that grin again. He wielded it like a weapon. He lifted his bottle and drank, his gaze still on her. She didn’t like the scorching energy crawling through her veins.
Lowering the bottle, he puckered his bottom lip. “Does this help?”
“Maybe if you were five and asking for a lollipop.”
“I don’t think you like me much.”


She laughed. “What would give you that idea? I barely know you.”
Posted by Rhonda Lee Carver at 8:38 AM