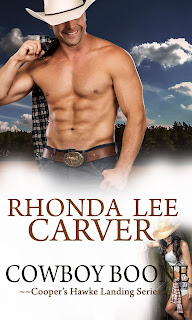 Flicking her eyes open, she found Boone standing a few feet away. The glow of the security light caught his concerned expression.

“What are you doing?” he asked in a husky drawl.

Pushing off the wall, she wiped the wetness from her lashes. “I don’t think that’s any of your business. You’re not my brother.”

“Well, if I were your brother, I’d toss you over my shoulder and take you back inside, or home to sleep off the drunk.”

With a loud sniff, she waved her hand through the air as if to wipe away his words. “Go back inside, Boone. You don’t want to keep Talia waiting. I imagine a woman like her would get the attention of a lot of men if she’s left alone too long.” She understood all too well her words were splattered with jealousy, but in time she’d extract all those silly emotions. He could have Talia and she’d have…who? She’d wasted a lot of time hoping he’d want her too.

“I don’t care about Talia, but I do care that you’ve drank too much and are about to make a big mistake.”

She laughed which came out more as a snort. “Give me a break. Don’t you worry about me. I can handle my alcohol, and a man. I’m sober and know exactly what I’m doing,” she hissed.

One corner of his mouth lifted as if he found her humorous. “I don’t know what’s come over you, Frog, but—”

“Frog? Did you call me that god-awful name again? That’s it! I’ve had it up to here with you calling me that.” She sliced her hand through the air a few inches above her head. “Do you realize how demeaning it is to be named after a slimy, green amphibian? No, I bet you don’t. Or how you and my brother ruffle the top of my hair like I’m a dog. I’m not a dog if you haven’t noticed. I’m a woman! A thirty-year old woman who can sleep with any man she wants to sleep with.” The dam had broken and now the words poured out. “I get that you don’t see me. I could rip my clothes off and prance around this parking lot and you still wouldn’t see me as anything but Brody’s little sister. Well, Boone Hawke, that’s your loss because I promise you my skin isn’t slimy and definitely not green.” She pointed her finger into the center of his chest, wishing she could ignore how muscular he was. “While you’re feeling up Talia tonight I’ll be with Mitch, a man who sees me, and wants me. Yes, do you hear that? He. Wants. Me.”

Feeling a bit lighter after her outburst, she exhaled and crossed her arms over her chest, tapping the toe of her boot against the concrete. “Maybe.” She looked at him through the veil of her lashes.

“It’s my turn.” He took a step, then another. She backed up, sandwiched between two strong walls—one being his beefy chest. He lowered his face closer, mere inches from hers. His warm, whiskey spiked breath brushed her cheek. She inhaled a whiff of his masculine, clean scent that targeted her nipples. “If calling you Frog bothers you so much, I won’t do it again.” He pressed his palms into the wall on either side of her head, imprisoning her in his personal space. His gaze locked with hers. “As far as you being Brody’s little sister, you are his sister.” As if to make her squirm, he picked up a tendril of her hair, rolled it around his knuckle then brought it to his nose. His jaw tightened. “Trust me, you wouldn’t have to get naked for me to notice that you’re not “little” any longer.” He stared down at her for a long time then dropped the strand of hair, taking a wide step back. “Is this for me?” He jutted his chin. “The outfit?”

This was her moment. She could tell him the truth about her feelings. What would he say? Would he drag her against him and kiss her and announce his own feelings? Or would he laugh at her and never talk to her again? She couldn’t live in the same town as him if that happened.

She opened her mouth, but nothing came except for a tiny squeak. She planted her hand against her stomach where a flock of butterflies had taken up residence.

His shoulders dropped some. “I hope Mitch appreciates how wonderful you are.” He took a step for the door then looked back at her. “I’ll help with the committee. Whatever you need. I’m not so callous that I can’t see the importance of a park and a nice place for kids to play or making this town the best it can be. I’m not as self-absorbed as people want to believe.”

He hesitated at the door.

“You better go, Daisy. You don’t want to keep your prince waiting.” Boone disappeared inside and Daisy was left standing in the cold feeling like she had lost her prince and he was back inside Pelican.